How to find the perfect gear ratios for your MTB drivetrain 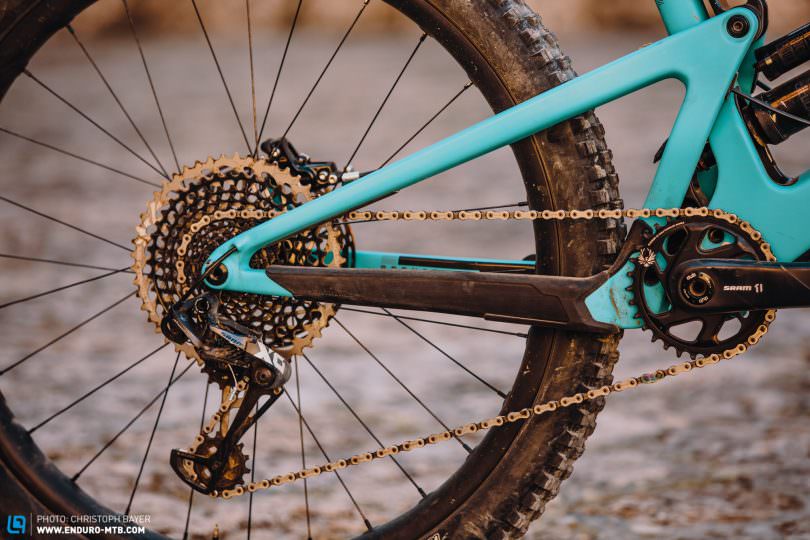 For many riders, working out gear ratios seems like a Gordian knot; there continues to be a fear of not having enough gear range when switching over to a 1x drivetrain. With a little mental arithmetic, however, you’ll quickly be able to bring light into the dark. We’ll show you, step by step, how to find the right cassette and chainring combination to suit your needs.

With 1x drivetrains, most riders tend to consider the size of the chainring first. “Of course you won’t make it up that climb with a 34T chainring” – that’s probably how most conversations regarding gear ratios with your riding buddies go, but it isn’t quite as simple. The most important aspect of your gear range is the ratio of the easiest gear since that will determine whether or not you be able to ride up that climb or have to push. It basically boils down to three factors: the gear range of the cassette, the size of the chainring and the size of your wheels.

Working out the gear range of your cassette We’ve compiled a chart that compares the gear ratios of three common drivetrains with the following gear steps:

Once you’ve understood the basic principles you’ll easily be able to compare the gear ranges and ratios of different drivetrains. If switching from a 1X11 SRAM drivetrain with 32T chainring to an Eagle drivetrain, you’ll know to fit a 38T chainring for a similarly easy climbing gear. The same applies when you’re upgrading to the new 12-speed XTR drivetrain since its 10-51 cassette is very similar to SRAM’s Eagle drivetrain. If you had to switch to a 1×11 Shimano drivetrain with a 34T chainring, the lowest gear will be a little easier than before, or a little harder than before with a 36T chainring. The same equation obviously applies to the largest available gear too. A 29″ wheel has an outside diameter of 622 mm, paired with a typical 2.25″ tire, the total diameter works out to approximately 735 mm. A 27.5″ wheel has an outside diameter of 584 mm and with the same size tire it works out to approximately 697 mm. As a rule of thumb, to keep the gear ratio similar when changing from 27.5″ to 29″ wheels you would have to go two teeth smaller on the chainring. The distance covered in the lowest gear with a 34T chainring and a SRAM Eagle drivetrain on a 29er is about 1,57 m per crank rotation, and on a 27.5″ bike with a 36T chainring, one crank rotation gets you 1,58 m. The bigger the gear range of the cassette with the same amount of gears, the bigger the steps between gears. This is particularly important to consider when upgrading your existing 10- or 11-speed cassette for one with a bigger range, which can be a good compromise for some riders. When switching to a larger chainring, be sure to check what the frame manufacturer specifies as the maximum size – your frame might not have enough clearance for a bigger chainring. Bigger chainrings also affect ground clearance, so you might run into problems on bikes with particularly low BBs.

How does all of this translate on the trail?

Which gear ratio is best? There’s no way to answer this question without factoring in the rider and the kind of terrain that you typically ride in. Once you’ve understood the basic gear ratio calculations though, you’ll be able to work out which chainring size best suits your kind of riding.

My job is to make sure you guys get access to the hottest news, the best reviews and the most inspiring stories from the world of mountain biking. Just like my work, I’m not keen on putting a label on my favourite type of riding - as long as I’m having fun then I don’t care if I’m grinding my way up a thankless climb or knocking off vertical metres in minutes on a gnarly descent.